Last week, the price on the European market dropped significantly - to 3 euros per mWh. The Ukrainian market also had a strong reaction to such changes. 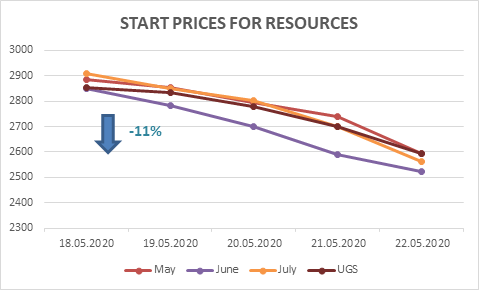 Last week, the price of natural gas on UEEX fell extremely fast.
The activity of participants was relatively high, the initiators of trading were both mining companies and traders.
Thus, PGNK, PrJSC Ukrnaftoburinnya, Kraft Energy, Ukrainian Drilling Company, etc. tried to sell natural gas. The most active initiator of trading traditionally was Naftogaz Trading. The company has formed 35 starting positions for the sale of resources of May, June, July and natural gas in UGS.

In general, companies tried to sell the resource of May, because closer to the end of the month it will remain unclaimed, as well as expecting a further sharp decline in prices, which occurred later. 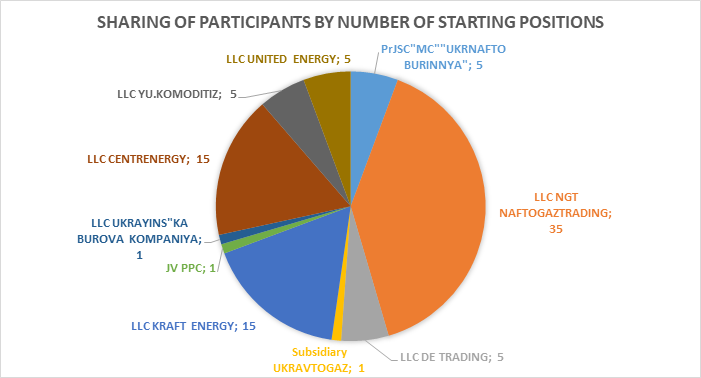 The prices of all hubs, without exception, were declining quite significantly. For example, on the Dutch TTF hub, exchange quotations fell to 3 euros / mWh, which is equivalent to 35 dollars per thousand cubic meters at other hubs, the spot price is still high - from 42 to 74 dollars.

Prices of contracts with delivery in due time, dollars / thousand cubic meters, May 21

The current unprecedented decline in prices is influenced by several factors simultaneously. First, is an epidemic of coronavirus. Although Europe is gradually coming out of quarantine (in terms of trade, social sphere, etc.), industry has suffered greatly, some companies have stopped working. 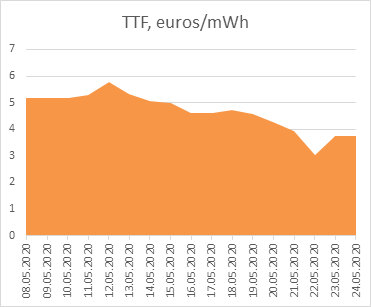 Thus, the supply of gas to industry has significantly decreased. With low demand, storage is filled in the usual way. It is expected that European repositories to be fully filled by August. Currently, companies are interested in storage of gas in Ukrainian storage facilities.
Although Russia and Norway supply less gas to Europe in 2020 than in previous years, this does not help stabilize the price.
The opposite trend is observed in oil prices. So, last week there was a significant increase in prices, so quotations per barrel of oil reached 35 USD. To a high extent, the price reacted to the increase in demand in the United States and a decrease in inventories.

Last week, the main source of natural gas in GTS Ukraine was domestic production, which amounted to about 55.5 million cubic meters per day. The level of imports remains high - 40 million cubic meters per day. It is obvious that domestic gas production is now enough to cover the level of consumption, and most of the imported gas is injected into underground storage facilities. As of May 21, UGS contained 17.5 billion cubic meters of natural gas. At the same time, Ukraine is developing services providing for foreign storage companies in the "custom warehouse" mode, given the sufficient number of unused gas storage facilities.

Among the areas of import in the first place is Hungary, where about 21 million cubic meters were sent daily, this is half of the total level of imports from the EU.

European traders are afraid of negative prices for gas. A month after USA oil prices fell below zero, European gas markets also face the prospect of falling sharply amid declining demand and rising stocks. Some traders expect prices for European short-term contracts to be negative. Unlike oil in the United States, gas prices in the UK were previously negative, falling below zero in 2006 after the Langeled pipeline from Norway first began pumping gas into the UK. Then also the storages were almost full.

Information platforms GTS and UGS combine two services :short haul and «customs warehouse».On the information platform of gas storage facilities it is possible to apply for storage in the mode of "customs warehouse" of natural gas, which is transported under the short haul mode from May 21 this year.
This became possible due to synchronized changes in the information platforms of the GTS and UGS. The new service will be most in demand by Ukrainian and foreign gas traders who use Ukrainian gas storage facilities for seasonal gas storage. Currently, the cost of transporting gas at a short haul tariff and further gas storage in Ukrainian underground storage facilities is much more profitable compared to gas storage tariffs in Europe. This leads to the growing popularity of these services in the European gas market. Thus, as of May 1, 2020 from 2.4 billion cubic meters of gas stored in the "customs warehouse", 0.3 billion cubic meters of gas is pumped using short haul.