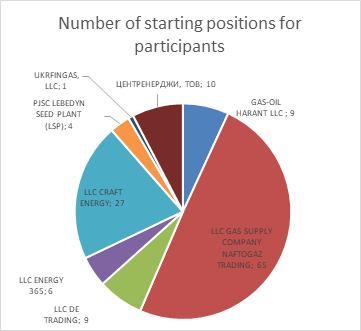 For the last two weeks trades initiators have formed 131 starting position on natural gas purchase and sale. Resources of September, October, November and UGS were proposed for the trades. For the first time on September 11 Naftogaz Trading put up for the sale quarterly products: 4-th and 1-st quarter of the next winter season on the prices accordinly 6500 and 6700 UAH including VAT.
Among trades initiators 8 companies were presented. In general, as the cheapest among month products trades initiators have avaluated resource of August (5352 UAH), and the most expensive resource of November (6392 UAH). By the end of the second week of September the starting prices of September, October and UGS were equalized, and the resource of November remained at a higher level.

During the last two weeks of September prices were more stable than in August. Participants paid the most attention to the resource of September. As of September 11, quotations of September resource made up 5193,79 UAH, October - 5313,28 UAH, with VAT per thousand cubic meters.

Stable gas supply and increase in demand have a positive impact to the market for the last two weeks. The season change is coming, that is why price are growing in a long term period and this tendency will continue.

Balance indicators showed significant changes. Due to the cessation of physical supply of natural gas from Slovakia for scheduled repairs, the overall level of imports has decreased. For example, on September 1, imports were 25% lower compared to August 31. However, the level of virtual reversal increased in a similar way, which helped prevent even greater fluctuations in supplies. In total, the average daily rate of import during September was 79 million cubic meters of natural gas. The Slovak route remained the main one for gas import and provided 74 percent of the flows. 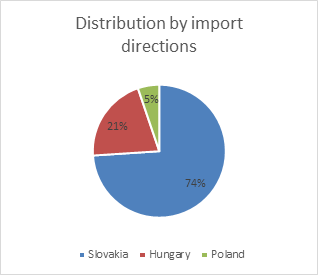 Over the last two weeks, over 20 tenders for the purchase of natural gas by budget institution were held. In total, 135 million cubic meters of natural gas were purchased, but 132 million cubic meters of this amount is related to the procurement of Ukrtransgaz. Thus, 3 tenders of Ukrtransgaz for purchases worth 485 million UAH (VAT exclusive) was won by Naftogaz Trading Company. The prices were in the range of 4,03 - 4,71 per cubic meter with VAT.

Among other tenders the largest contract was received by YUG-GAZ Company for supplies of natural gas to the Education Department in Khmelnytskyi region in the amount of UAH 1,24 VAT inclusive. Tender prices varied in the range from 2,9 to 5,28 UAH. In general, the average price was 3,82 UAH including VAT.

American Louisiana Natural Gas Exports rejected the project of cooperation with Ukraine, which provided for long-term supplies of liquefied natural gas (LNG) of about 5 billion cubic meters of gas per year, confirmed Acting Energy Minister Olga Buslavets. As reported, in late May 2020, the Cabinet of Ministers approved cooperation with Louisiana Natural Gas Exports according to supply LNG from the U.S. to Ukraine and the development of gas infrastructure with Poland.

Poland has reduced its predictions for the share of coal energy in the coming decades because it invests in net alternatives. As part of the renewed energy strategy published on September 8th, Poland has accelerated plans to phase out the use of coal, creating more opportunities for gas. The strategy now includes reducing the share of coal in the country’s electricity production from 75% to 37-56% by 2030 and 11-28% by 2040. Previously, Poland had expected the share of coal to be 56-60% in 2030 and 28% in 2040. The trend towards higher costs in coal power plants makes them less competitive with relatively cleaner alternatives, such as gas.

The first meeting of Memorandum Signatories on Gas Exchange Development on the basis of UEEX took place On September 3 the first meeting was held within the framework of the signed Memorandum between the Ministry of Energy of Ukraine, EBRD, Energy Community Secretariat and Ukrainian Energy Exchange on gas exchange development in Ukraine.During the meeting the issues of further tactical goals implementation were discussed, a step-by-step action plan was considered and a report on current results and the nearest plans to launch a standardized short-term gas market was provided. There were also discussed the issues of spreading the developments on the exchange development to other areas of UEEX activity, opening new markets related to ecology.