There was a week upward trend in prices last week. The participating conpanies were consistently active, paying the most attention to the resource of August.

For the past two weeks, resources of July, August, September and UGS have been offered for trading on the UEEX. Among the initiators of the auction were market participants of various categories - traders, mining companies, large consumers, suppliers of natural gas. There were offers for both purchase and sale of the resource. Due to limited demand, it is difficult for many sellers to sell the resource.

Thus, the initiators of the tender were 19 companies, which formed 218 starting positions. The participants paid the most attention to the resources of August and UGS. According to the results of the auction, the price increased in comparison with the start price.

Last week, prices at European hubs rose slightly, for example, on July 30, the spot price of natural gas on TTF was USD 61, and on NCG - USD 65. Contracts for the month ahead were 5% more expensive, the quarter ahead 83%, the season ahead - 99% more expensive than current spot prices. Demand for natural gas in Europe is beginning to recover. As the weekend approached, spot prices in European markets began to rise. For example, on TTF Monday’s supply contract was 6% more expensive than Friday’s. Such changes are due to lower flows from Norway. In Western Europe this week the weather will be cooler, wind power will decrease, which will lead to increased demand for gas.

As of Friday, July 31, the price of September futures for Brent oil is USD 43.5 per barrel. The recovery in prices for the fourth month in a row shows rising demand, but with the probable second wave of Covid-19, the threat of declining demand for oil is becoming more real.

Prices of contracts with delivery in due time, USD / thousand cubic meters, 30/07

Most of Ukraine’s GTS indicators were at a high level in July. For example, the total level of imports exceeded 70 million cubic meters. The Slovak route remained the main route for gas imports, reaching a share of 70% in the overall structure among the three destinations. The domestic production indicator remained stable - about 55.3 million cubic meters daily. Injection into UGS has increased significantly and exceeded the level of imports. This means that the vast majority of imported gas and part of domestic production were injected into the UGS.

Thus, the volume of injections on July 29 amounted to 77 million cubic meters. Due to the intensive filling of UGS managed to reach a record level of UGS loading - 22 billion cubic meters. This was the active volume of gas in underground gas storage in 2019 at the end of the injection season in November. This year, this level was reached 100 days earlier. 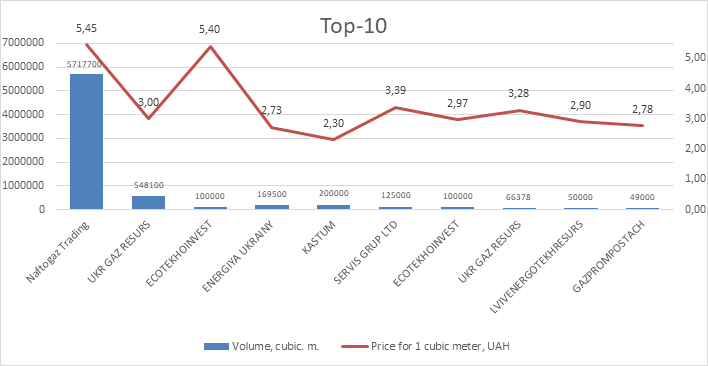 The Energy Community Secretariat, the Ministry of Energy, the EBRD and UEEX have signed a memorandum of understanding on the development of the gas market. According to the report, the memorandum provides a common framework and conditions for cooperation for the development of trade in natural gas on the UEEX. The parties concluded to agree on concrete actions to achieve the goal at the first meeting of the memorandum, scheduled for September this year.

Market participants call on the NEURC to postpone for a year (until October 1, 2021) the introduction of a mandatory fee for balancing neutrality and together with the GTS operator, service customers and relevant associations to improve the method of calculating the amount of this fee. It should contain a fair approach to charging, a transparent and clear calculation mechanism. Companies are concerned about receiving unreasonably high payments for balancing neutrality and the trend of their monthly growth. For now, these payments are for information only, but from October 1, they will be mandatory for companies.

The NEURC proposes to reduce the size of permissible imbalances for suppliers from 10% to 3%. The relevant draft was published on the official website of the Regulator in order to receive comments and suggestions from all interested market participants. The project envisages amendments to the GTS Code in terms of reducing the tolerance (for customers of transportation services from 10% to 3%, and for customers of transportation services that are GDS operators from 15% to 7.5%) and increasing the amount of adjustment from 10 % to 20% - deviation of marginal prices from the base gas price. The draft resolution also provides for a change in the provisions of the GTS Code in terms of determining the sufficient amount of financial security and its provision by customers of transportation services in favor of the GTS Operator, as well as the usage by GTS Operator the service of balancing.