In the past two weeks, 13 auction sessions were held on UEEX, the vast majority of which were in commercial sections. The initiators were the state generation (Energoatom, Ukrhydroenergo), companies from the DTEK Group, the Guaranteed Buyer, and other market participants. Participants very actively used the new tools offered by UEEX both individually and in combination. Thus, the Guaranteed Buyer conducted 2 trading sessions, at which it offered the base load and block positions in the mode of trading in ratios.

All the company’s starting positions with a coefficient of 0.99 of the Day-ahead market price were sold.

262.36 thousand MWh of electricity were sold in the IPS of Ukraine. The majority of electricity sold falls on the Guaranteed Buyer (on sales using coefficients) and Energoatom-Trading (on sales in special sessions to energy-intensive companies). No weighted average price were formed on the territory of Burshtyn Island. 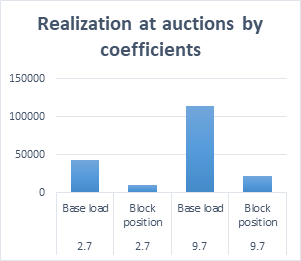 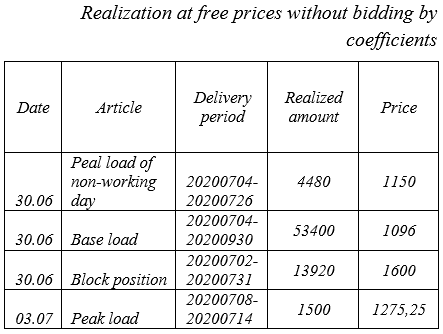 Recently, the level of NPP generation has increased significantly due to the growth of consumption above the forecast. In general, consumption increased due to the easing of quarantine restrictions and hot weather, which stimulates the consumption of electricity for cooling. TPPs and CHPs in general also had a growing trend.

Genaration of RES decreased slightly, and HPPs and HAPPs dropped significantly to 0.77 GW, which is a consequence of lower water levels after rains.

Thus, on July 9, the total average daily generation was 14.99 GW, which is 2% more than two weeks ago. In the structure, 53% was occupied by nuclear power plants, 26% - thermal power plants. 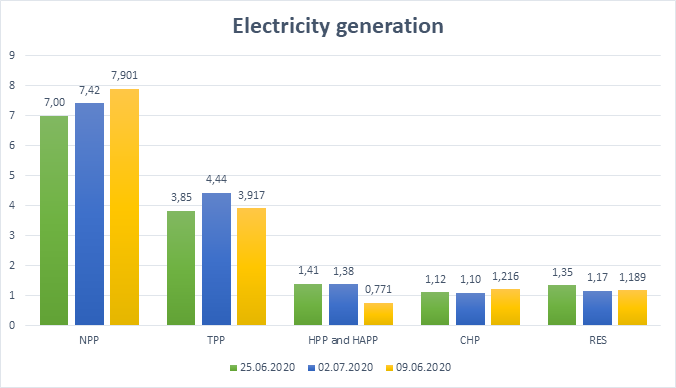 Over the past two weeks, market prices for the day ahead have been quite volatile in IPS of Ukraine. Thus, the weighted average prices varied in the range of UAH 948 – 1461. On the territory of Burshtyn Island did not observe significant fluctuations (1608 - 1710 UAH).
In general, the average value of the weighted average price in the IPS of Ukraine for the last two weeks was 1167 UAH / MWh, in BEI - 1636 UAH / MWh. Thus, the gap between the prices of the two trade zones has widened. At the Day-ahead market the volume of sales orders is constantly exceeded before purchase orders - more than 2 times. Thus, declining demand and rising supply stimulate price imbalances.

Electricity must be generated at the same time as consumption, so the main factor is the price. The general trend of changes in spot prices over the past two weeks is upward.
Thus, on July 9, the price of basic electricity in France was 41.54 EUR/MWh, in Hungary - 43.07 EUR/MWh, in Poland - 53.50 EUR/MWh. In August-July, electricity was traded at prices in the range of 34.24 - 52.35 EUR/ MWh.
Prices are rising, in part, due to the improvement of the situation on the fuel market, and before the weekend quotes fell sharply on forecasts of declining consumption.

Over the past two weeks, there have been about 40 tenders for the purchase of electricity by budgetary institutions for a total of almost UAH 150 million. Price fluctuations were pronounced, especially in the largest tenders.
But in general, the average price was UAH 1.93 / kWh. The largest contract was awarded to Electro Prime.
It will supply 33.3 million kWh to the Popasna district water utility electricity at the starting price of UAH 3.10 / kWh.

Germany’s lower house of parliament voted on Friday to phase out coal as an energy source.The two draft Law call for the closure of the last coal-fired power plant by 2038 and spending about 40 billion euros to help the affected regions overcome the transition. By 2022, coal-fired power generation in Germany should fall by 15 GW, and by 2030 by another 16 GW. The approved plan is part of Germany’s "energy transition" - an attempt to wean Europe’s largest economy from heating the planet with fossil fuels. Achieving this goal is more difficult compared to similar countries, such as France and Britain, due to Germany’s existing commitment to phase out nuclear energy by the end of 2022. Michael Vassiladis, chairman of Germany’s main miners’ union, hailed the decision, calling it a "historic milestone". He called upon the government to focus on expanding renewable energy production and using hydrogen as a clean alternative to storing and transporting energy in the future.

The first year of the electricity market showed that market participants began to use more actively the various trading instruments offered by the Ukrainian Energy Exchange, the number of companies, including private ones, is constantly growing, but the stock market is still developing. This comment on the anniversary of the launch of a new model of the electricity market for ExPro was provided by the chairman of the UEEX exchange committee Oleksii Dubovskyi. "We appreciate our positive contribution to market formation in terms of giving it transparency, competitiveness and centralization of pricing. In the future, we will continue to work to make the market of bilateral agreements the basis for the formation of a trading portfolio and hedging for each participant," said Dubovskyi. 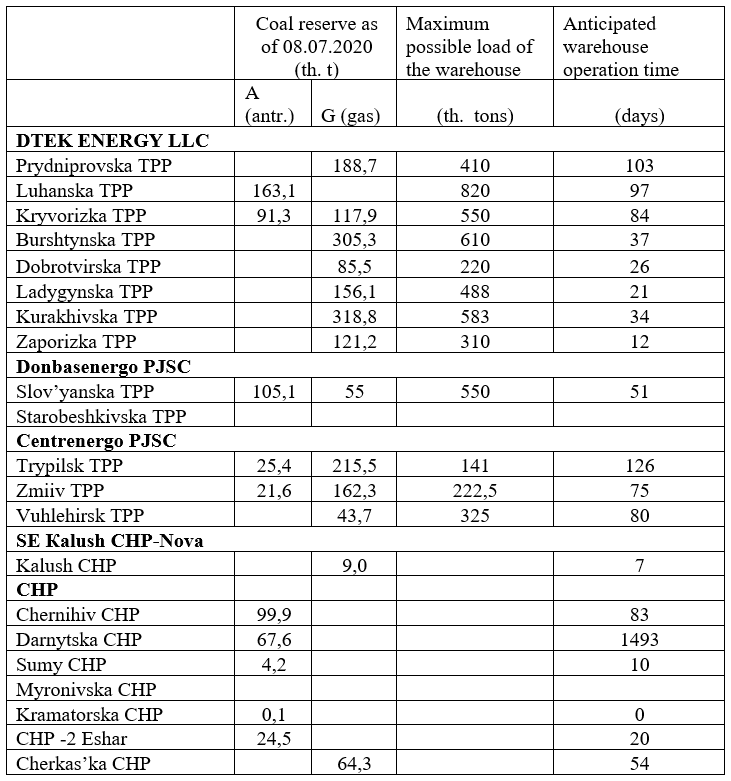